Memoirs of the Apocalypse 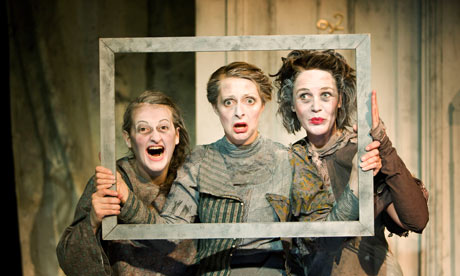 Floor, Wall, and Chimney look out of the window

Memoirs of a Biscuit Tin was excellent, if the saddest thing I have seen on the Fringe (or in fact since Up). A story of parts of a house – Wall, Floor, Chimney – investigating the disappearance of their owner, Rosie Benjamin. They visit her past through ingenious use of props – if I say a hatstand plays the same role as Ellie in Up, and that I’ll never look at drinking from a bottle of milk in the same way again, you might begin to get the idea – and slowly piece together what has happened. A tale of loneliness and remembering.

The matinee showing of Barbershopera had a tough job on its hands following that, and thankfully it did so, with a madcap story of the Four Horsemen of the Apocalypse (well, three plus Beth the primary school teacher after a naming mix-up) not really wanting to carry it out and trying to fix things up instead. Some excellent singing, and their ire at ineffective hand-driers is well directed.

Slipping back to the 12th century, Hildegard of Bingen and the Living Light told a story of the nun Hildegard of Bingen, interspersed with songs on period instruments that she had composed. She communicated with popes, lectured, founded her own monastery and wrote theological texts. Oblique reference was made to how her vision could possibly have been a symptom of migraines, and this was an interesting look at what has changed (or not) in the past 900 years.

Home for tea (first time I’ve done that this Fringe), then back out (sans bag and therefore umbrella, which obviously I came to regret) and to the present day for Frisky and Mannish: The College Years. The sequel to School of Pop that I saw on Thursday, this was a very welcome more of the same, including highlights such as Come on Eileen for Blood Brothers, Creep as a dance track, Saturday Night as a ballad. Polished until it gleamed.